Robert (Terry) Ault, 74, of Columbus, passed away on October 30, 2020. He was born in Marion, Ohio on April 6, 1946, to the late Robert and Neomi (Don Carlos) Ault. In addition to his parents, Terry was preceded in death by his sister, Ruhann Kightlinger. 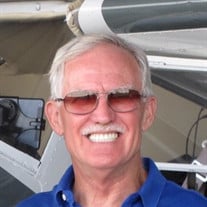 Terry was a combat veteran, decorated for his service as an Army helicopter pilot in Vietnam. Upon exiting active duty service, he completed his education at the Ohio State University, and made his home in Columbus. He continued to serve his country in the Army National Guard until 1996. In 1978, Terry pioneered the news helicopter division at WBNS 10 TV (Columbus) and WTHR 13 (Indianapolis), and ran it as Chief Pilot until he retired in 2009.

Funeral services are scheduled for this Friday at 11AM at Resurrection Cemetery, 9571, North High St, Lewis Center, OH 43035.

In lieu of flowers, donations in Terry’s memory may be made using the link below. All donations will go to the ongoing cancer research at the James Cancer Hospital from which he benefited.